I wrote Mayor Stewart and the members of the Takoma City Council as follows, on April 27, 2021 —

Arthur David Olson tweeted last night that “Councilmember Searcy proposes dropping funding for [the police] canine unit.” I’m glad. I hope you will support her proposal and go further, as I will explain, to reaffirm Takoma Park’s one-time policy of deemphasis or deprioritization of marijuana arrests. I bring this up now because fully one-third of 2020 police dog deployments were for marijuana enforcement and that’s not good.

Takoma Park Mobilization’s 2020 campaign to “End K9 Policing in Takoma Park, MD” generated 257 messages to the city manager and police chief. Our view is that “K9 units have been historically used to oppress and intimidate rather than to protect, particularly Black people,” and we offered our view, “Takoma Park doesn’t need police dogs to ensure public safety.”

The Takoma Park Police Department’s 2020 annual report supports that latter view. At a cost of 75 training hours in 2020 plus the cost of maintaining the city’s one dog, that dog took only 12 calls last year! I’m attaching a screen shot of the relevant pages.

Excerpting from the report: 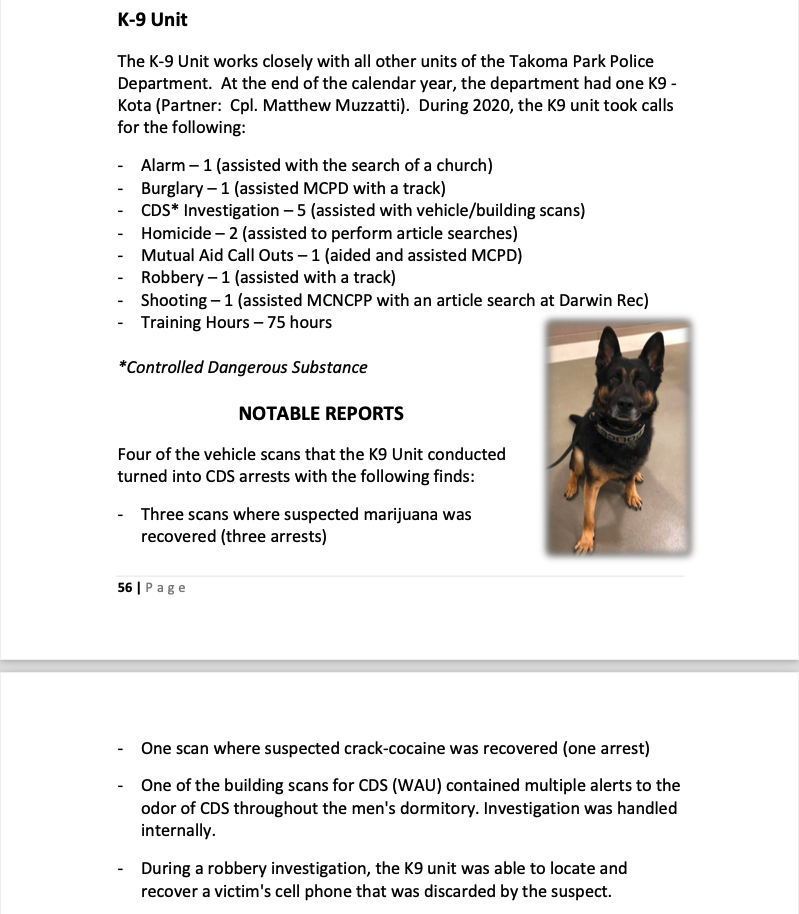 In total, the TPPD reported 22 civil marijuana arrests in 2020, which would be for possession of less than 10 grams of marijuana.

The City of Takoma Park should not be making marijuana arrests nor conducting searches or participating in investigations for marijuana (or paraphernalia) violations. These are low-level civil offenses. Enforcement does not serve public safety. Enforcement does lead to police interactions that too-frequently on a national scale are pretextual or escalate to harassment and violent confrontation.

[Added: While the TPPD report uses the term “arrest,” Takoma Park Police Chief Antonio DeVaul confirmed in e-mail to me, “although MD has decriminalized possession of marijuana under 10 grams, the federal uniform crime report (UCR) still requires us to report such citations as arrests. They are not physical arrests, nor are they criminal arrests by MD law. They are civil citations where the offender can pay a fine. They are not taken into custody and there are no criminal implications.”]

Some years ago, the city council and administration agreed on a policy of deemphasis or deprioritization of marijuana arrests under which the police department wouldn’t go after suspected violations absent other suspected crimes. I think this was under Chief Ron Ricucci. Unfortunately, I don’t have any documentation; I do not believe there was a police general order.

I urge you to reaffirm this policy and direct the Takoma Park Police Department not to pursue, investigate, or charge marijuana or paraphernalia offenses, and I urge you to retire the TPPD’s K9 policing unit.

Thanks for your consideration.