An ordinance you will consider on October 14, 2020 [that] includes a provision that “authorizes the removal of the deteriorating mural at B.Y. Morrison Park and returning it to the artist.”

Really what I saw was an opportunity to bring up a solution to Takoma Junction traffic congestion and the desire to create usable junction public space. Credit Eric Saul for the approach! The remainder of my letter to the council — the remainder of this post — describes what the city should do in close cooperation with the Maryland State Highway Administration —

Looking at the larger context: I believe that the best answer to Takoma Junction traffic concerns is reconfiguration of the intersection in front of the TPSS Co-op. While I don’t personally share these concerns, I note that Community Vision for Takoma in particular has pushed them to the forefront, and the Takoma Junction Task Force, which I co-chaired, did look at the possibility of intersection reconfiguration.

The State Highway Administration should realign Carroll Avenue to cross Ethan Allen Avenue (SR 410) in a squared-off intersection with Sycamore Ave on the other side. We could then eliminate part of the traffic-signal cycle and provide more time for pedestrian crossings and more green-light time to vehicles on 410 and on Carroll Avenue, decreasing congestion and boosting pedestrian safety.

The city would relocate B.Y. Morrison Park, possibly including the gazebo structure (which is not historic), to an area in front of the Carroll Avenue storefronts. This relocation would transform B.Y. Morrison Park into usable public space, which it isn’t currently, and would thereby address Councilmember Kovar’s and Community Vision’s concern about junction-development public space.

Many community stakeholders support intersection reconfiguration. Given the possibility that we’ll move forward with that, I would not spend public funds on restoring the gazebo mural in-place, and that does indicate mural removal as the best course.

I do wish to add: Intersection configuration must not involve elimination of the crosswalk at Grant Avenue. The NDC project’s layby lane should stay in the location currently planned for it. 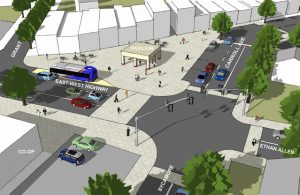