Takoma Park-Silver Spring is experiencing a school space crunch. Public schools are overcrowded and the problem is getting worse. The school system is taking steps to add capacity, particularly at the elementary level. But where and how? These are open questions. Should Montgomery County Public Schools (MCPS) open a new school in our end of the county, or perhaps add classrooms at schools that include Piney Branch Elementary School (PBES) in Takoma Park? The answer — the approach taken — will have repercussions for decades to come. And as an aside, the decision will determine the fate of the widely-used PBES swimming pool. 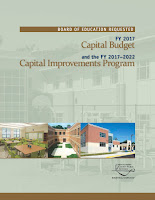 School space is a capital cost so proposed overcrowding remedies are covered in the FY17 capital budget and 2017–2022 Capital Improvements Program. (The county’s and schools’ FY17 fiscal year starts July 1, 2016.) You can find the Board of Education’s FY17 capital requests online. In that document, the BOE asks funding for additions at East Silver Spring, Montgomery Knolls, Pine Crest, Piney Branch, and Woodlin elementary schools to relieve the overutilization of several elementary schools in the lower portion of MCPS’s Downcounty Consortium.
“Overutilization” is an artful word, isn’t it? It hints that school families are to blame for the capacity issue. Regardless, MCPS officials are on our side. Note a memorandum included in the BOE capital request doc, starting on page 16, that directs,

This is where the Piney Branch ES pool connection comes into play. The superintendent’s proposed PBES classroom expansion, dealing with a projected PBES deficit of 129 seats by 2021-2, would entail eliminating the pool. In particular, the superintendent says “A feasibility study will need to be conducted to explore razing the existing pool to construct an addition in the future. With the smallest site of any school in the county, at 1.9 acres, there is no room on the Piney Branch Elementary School site to accommodate relocatable classrooms.”

While County Councilmember George Leventhal and Board of Education Member Chris Barclay have asked MCPS to study building new PBES classroom space above the pool, keeping the pool open in the expanded school building, frankly that could be an awkward arrangement and there’s no assurance MCPS could make it work. By contrast, if MCPS rehabilitates the Parkside building as a school, there will be less pressure to expand other consortium schools such as PBES. Again, reopening Parkside is a creative solution, a welcome alternative to the superintendent’s proposed approach.

A Capital Improvements Program request transmittal letter, addressed to the county executive and council president and signed by Board of Education President Patricia B. O’Neill, acknowledges the system-wide need:

“For the 2015-2016 school year, MCPS is experiencing its eighth straight year of significant enrollment growth. Official September 30, 2015, enrollment is 156,674 students for a one-year increase of more than 2,800 students. Since the 2007-2008 school year, enrollment has increased by 18,929 students with most of the increase at the elementary school level.”

And it describes the alternative BOE approach, requesting CIP inclusion of $100,000, “to conduct a feasibility study to explore an elementary school reopening on the former Parkside Elementary School site or another nearby former elementary school site,” to relieve overcrowding, the alternative that would focus construction on one site rather than many and, as an aside allow the PBES pool to continue operating.

Support from County Executive Ike Leggett and from the Council will be critical. MCPS proposes annual capital and operating budgets, but it’s the Montgomery County Council that has final say (subject to a state-imposed “maintenance of effort” constraint that the county fund the same dollar amount per pupil as the prior year).

The county officials’ decisions are important. Schools are practically the only local institutions that draw and intermix individuals from diverse cultural and economic backgrounds. Only public libraries and sports leagues have similar potential, but our communities’ children spend far more time at school than they do anywhere else other than at home. Facility, boundary, and catchment area choices shape our communities.

Want to weigh in? The Board of Education will hold public budget hearings, on the capital and operating budgets, on January 7 and 14, 2016. Sign up to testify, starting December 14. And you’ll be able to testify at county council public hearings in the spring.

Before then, attend or watch the Takoma Park City Council’s December 14, 2015 meeting. The council is slated to have an MCPS presentation, followed by a worksession discussion — an Overview of Montgomery County Public School Capacity — at 8:05 pm. I hope and expect the council will take up a resolution, at a later meeting, providing city comment on MCPS facilities plans. Public comment is at 7:30 pm. Do communicate your view to the city council.

Finally, regarding the MCPS operating budget: A good place to come up to speed is MCPS’s new Budget 101 Web site, which aims to answer many of the questions that parents, students, staff, and community members have asked about the MCPS Operating Budget, according to Interim Superintendent Bowers. The superintendent has proposed $2.45 billion FY17 operating budget, online on the MCPS Web site.

There is no better social investment than adequate school funding, well placed, if your goals are to provide social and economic opportunity to all segments of our population, to immigrants and established residents, whether well-off or struggling, regardless of cultural background. Facilities choices should be linked to a broad set of community needs. One such choice is at hand, the approach we’ll take to adding downcounty school capacity. The right choice is to explore the Parkside option by funding the BOE requested feasibility study.