Delegate David Moon (D-20) is the primary sponsor of proposed 2016 Maryland legislation that would enable Montgomery County to enroll new voters in county Board of Education (BOE) races.

I’m for it! There are strong, legitimate, and compelling reasons that non-citizens, and perhaps also 16 and 17 year olds, should be allowed to vote in local races that concern them — BOE races per David’s MC 25-16 bill draft, and perhaps also elections for Montgomery County Council and Executive. 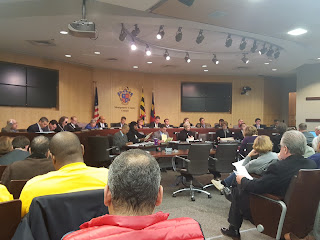 The Montgomery County state legislative delegation held a hearing Monday evening, November 30, on a variety of county bills, MC 25-16 among them. At David’s suggestion, I testified at the hearing, as did Takoma Park City Manager Suzanne Ludlow, relaying the city’s favorable position, and a number of others. Of course Takoma Park supports this latest instance of the inclusive politics! As I note in my testimony, below, we have had non-citizen voting since 1992, and further expanded the franchise in 2013, to 16 and 17 year olds and on-probation and on-parole felons.


The City of Takoma Park exercised this right in 1992, allowing non-citizens to vote in city elections, after a 1991 Share the Vote campaign led to a favorable referendum vote.
In Takoma Park, non-citizen voting works. The city clerk maintains a local registration database, separate from the state voter rolls. Election judges are easily able to handle the two classes of voters, state-registered and city-registered.
Takoma Park further expanded the electoral franchise in 2013, when Councilmember Tim Male and I, then a city council representative, introduced successful legislation to extend the vote in city elections to 16 and 17 year olds and to on-probation and on-parole felons and to establish same-day registration and voting during early voting and on election day.
In Takoma Park’s 2015 city election, we had 105 registered 16/17 year olds, 47 of whom voted, a 44.8% rate. We had 523 registered non-citizens, of whom 71 voted.
I don’t believe that, in 23 years of non-citizen voting, anyone has ever been deported for voting in Takoma Park or been denied naturalization.
The city also uses instant run-off voting, instituted in 2006 after a referendum, and a referendum this year directed the council to move city elections to even years, to coincide with county, state, and national November general elections, if the city’s distinctive voter qualification rules can be maintained. We are optimistic that the city will work out a mechanism to support the different classes of voters.
In 2012, Maryland Delegate Patrick L. McDonough tried to strip cities of the ability to allow non-citizen voting. His legislation failed. As Montgomery County Councilmember George Leventhal said that year, in opposing the delegate’s bill, “A foreigner might have a different foreign policy interest, but when you are talking about choosing a mayor or a city council member, your interests are equal to your neighbor’s.”
The same thought applies to local Board of Education races. Montgomery County non-citizens send their children to public schools and pay taxes that educate others’ children. Their interests, in the BOE races, are equal to their citizen neighbors’. They deserve a vote.
MC 25-16 is about inclusion of an underrepresented, interested segment of Montgomery County’s population. It’s about engagement, about creating a sense of community belonging for recent immigrants. There are few downsides. Please endorse and support MC 25-16.