On Monday evening, October 12, the city council will vote on five items, discuss the site plan application for a proposed Takoma Park Taco Bell, and then discuss a tax waiver to facilitate purchase and rehabilitation of the Hillwood Manor apartments on New Hampshire Avenue.

The meeting agenda is online.

The first voting item is a Resolution Regarding the Montgomery College Facilities Master Plan (FMP). This FMP update will cover 2016-26 and must be filed with the state by February 1. We expect it will lay out the college’s plans for grounds and buildings over the next decade, but we don’t have a draft to comment on yet, so the city’s resolution comments on expections and the process.

Our key points: New or enlarged construction should be located on the Silver Spring side of the TP/SS campus, and the city, residents, Montgomery County, and Historic Takoma (as a party to a 2002 agreement) must be fully consulted.

Monday evening’s worksession will be the last-minus-1 time the council takes up the Taco Bell restaurant and drive-thru that MUY Companies’ proposes to build at New Hampshire Avenue and Holton Lane. MUY has filed a site plan application and the city has an opportunity to comment. We’ll discuss a resolution for an October 19 vote. 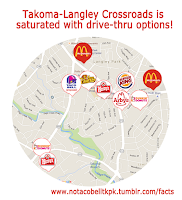 MUY proposes a bit of micro-sprawl that would occupy a central location in what the city had hoped would be a pedestrian-friendly zone, the New Ave. MUY has attempted to conform with the letter of the zoning rules and master plans that govern the location, even while including an anti-pedestrian, anti-smart growth, drive-thru service window in the proposal.

I oppose the drive-thru, as do Councilmember Tim Male and many, many community members. I’m hoping we can get at least recognition of concern, about inclusion of a drive-thru and about low-density development, in the city’s resolution. Councilmembers Fred Schultz and Kate Stewart and Mayor Bruce Williams have yet to state a firm position on the drive-thru, so if you have thoughts on the topic, you might focus on them.

Do visit the We Can Do Better than a Taco Bell in Takoma Park Facebook page and consider signing on to a resident-generated petition.

The City of Takoma Park is on the fore-front of preserving affordable housing in the Washington DC region, due to our rent-stabilization law and to our willingness to enter into partnerships with organizations the work to rehabilitate properties and maintain their affordability.

Montgomery Housing Partnership (MHP) is on such organization. MHP owns several Takoma Park buildings and seeks a payment in lieu of taxes (PILOT) agreement with the city. that would include a five-year property tax waiver, to facilitate purchase of another building, the Hillwood Manor apartments on New Hampshire Avenue.

In principle, I support an MHP PILOT for Hillwood Manor purchase. I would like to understand the justification for a full, 100% tax abatement, or a lesser amount. The MHP arrangement would allow a rent-stabilization exemption. While MHP has honorably lived up to its past commitments, this would be the first exemption to come up since the Hampshire Towers debacle involving Tenacity Corp., which purchased the building and received a rent-stabilization waiver but did not live up to agreement terms. Tenacity, from all appearances, acted shamefully and the government entities involved, including both the City of Takoma Park and Montgomery County, didn’t do our jobs.

The city’s grant of rent-stabilization waivers, which property owners including MHP say are a must if they are to receive funding that allows preservation of affordable housing, should be discussed openly. And instead of a waiver’s being automatic on application, and conveying automatically when a property is sold, an exemption should be granted only by council vote and should be subject to renewal conditions.

Finally, there should also be a code provision allowing the council to revoke an exemption if the grantee has not complied with terms of the agreement that justified the exemption.

I hope the next council will take up these changes to city code.

Please relay your thoughts on these items and other city concerns to me at sethg@takomaparkmd.gov or 301-873-8225, or write the full council via the city clerk at clerk@takomaparkmd.gov.

I have only a little over a month left to my council term. Please do challenge the candidates for election — the incumbents and aspirants — candidate information should be posted soon at elections.takomaparkmd.gov — on every city matter that concerns you, and then vote!