Happy Labor Day to all!

The city council’s summer recess is over. The are five items on the meeting agenda for Tuesday, September 8. I’ll give a run-down on the whole of the agenda and focus on two items, traffic calming associated with pending Carroll Ave bridge closure for reconstruction and discussion of a referendum on moving city elections to even years.

The meeting will open with a 7 pm public hearing on priority needs and proposed projects for Community Development Block Grant funding. CDBG is a federal program that targets persons or households of low and moderate income. If you have views on priorities, please attend and speak.

We will then, at 7:10 pm, have a report from the Emergency Preparedness Committee and emergency manager, followed by discussion and then the start of the regular meeting including public comment on other agenda items and city matters. At 8:10 pm, we’re slated to discuss a site plan for a proposed project at 6413 Orchard Avenue, in the city’s Pinecrest neighborhood.

A Referendum on Moving City Elections to Even Years

Councilmember Tim Male has proposed a referendum item, for the city’s 2015 ballot, on moving city elections to even years, when they would coincide with non-municipal general elections. The aim is to boost voter participation in city elections, taking advantage of the higher voter turn-out generated by county, state, and federal races.

Material for September 8 council agenda item, which includes discussion of other 2015 election matters including early-voting dates, is online.

At this point, I support Councilmember Male’s proposal and am leaning toward Option 2, which includes the clause “assuming voting rights can be maintained for 16-17 year olds, non-citizens and people with felony convictions who are on parole.” I will explain my support, but also I’d very much like to hear your view regarding a referendum item.

Takoma Park has had non-U.S. citizen voting for many years, for municipal elections only of course. We introduced 16 year old voting, and voting rights for on-parole and on-probation felons, in 2013, along with candidate access to apartment buildings and same-day registration and voting including on election day, this year November 3. These steps aim to encourage civic inclusion and to redress voting and voter-registration disparities. I wrote about these disparities in my February, 2013 “Let’s Enfranchise Takoma Park Renters and Strengthen the Right to Vote!“

Even-year voter turn-out should better reflect the proportion of minority and renter residents than we see in our current odd-year city elections. There is risk that attention to city issues and candidates would be drowned out by news from the larger races and that many voters will be making uninformed choices among city candidates, but I can’t see how we’d be worse off than we are now, when turn-out for (rare) hotly contested races barely exceeds one-third. And there’s a limitation: A switch to even-year voting won’t enfranchise the disproportionate number of minority and renter residents who aren’t registered to vote. Yes, disparities will remain, but we should move forward where we can and keep working on additional steps.

What do you think about placing the voting-year change on the 2015 ballot?

Council discussion is scheduled for 9:30 pm. 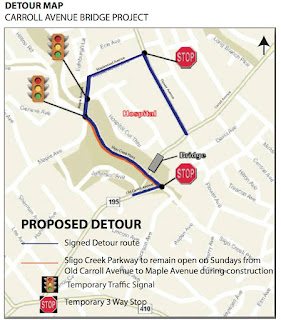 Finally, the Maryland State Highway Administration (SHA) is slated to begin rehabilitation of the Carroll Avenue bridge, near Washington Adventist Hospital, this fall. (The SHA will hold an informational meeting on September 24, 6-8 pm, at the Takoma Park fire station).


Please contact me with questions or concerns about these or other city matters, at sethg@takomaparkmd.gov or 301-873-8225.