The Monday evening, February 9 city council meeting opens with a presentation on library-redesign options, at 7 pm. Following public comment at 8 pm (later than usual!), and then a series of voting items, we’ll have a “Review of Listening Sessions and Discussion of Next Steps for the Takoma Junction Site – Criteria for Developers.” It’s scheduled for 9:10 pm.

I’ll provide a bit of detail on the library and Takoma Junction items and a couple of the voting items. The full agenda is online. Note that it includes distribution (but not discussion) of the Arts and Humanities Commission Annual Report. 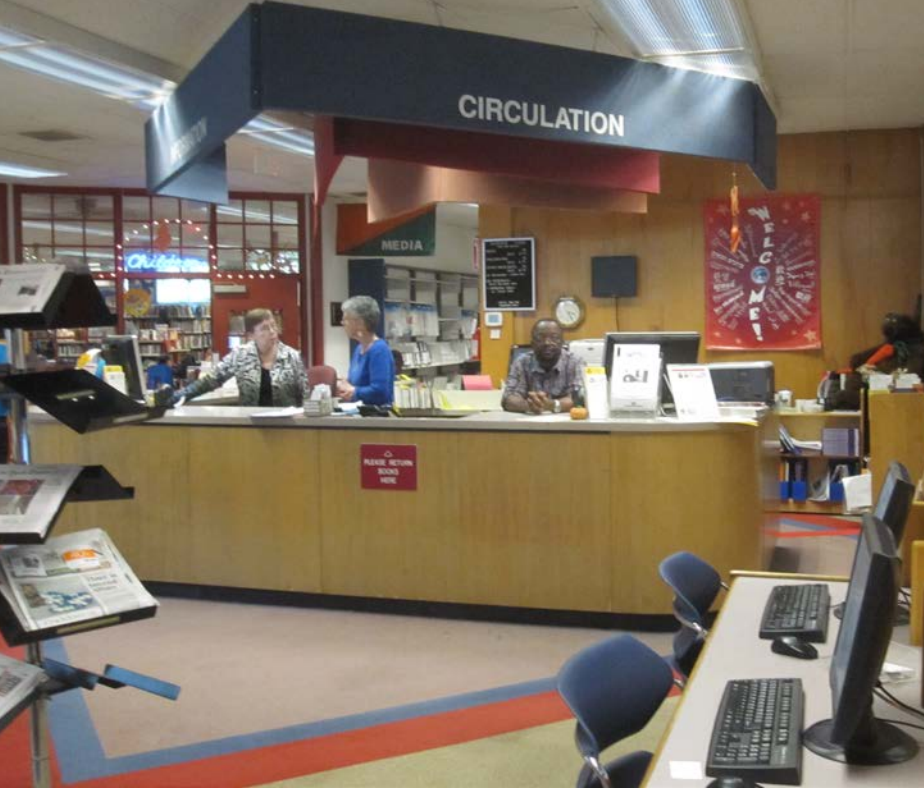 Per the council backgrounder, “in January of 2014, the library issued a ‘Community Needs Assessment and Visioning for a 21st Century Public Library’ [document] prepared by Providence Associates.” The city subsequently engaged The Lukmire Partnership (architect of the new Silver Spring Library) to produce re-design plans, with options for both renovation and expansion.

Note that the city has not yet committed to any redesign work.

Greg Lukmire, the partnership’s principal architect, will present options and estimated costs as detailed in the project report, which is part of the backgrounder file.The report summarizes Lukmire’s findings, conclusions, and recommendations. The price tags aren’t small. The estimated project costs range from $2.1 million to $3.5 million. Clearly we’ll have to consider the options, benefits, and financing carefully before proceeding

A Resolution and an Ordinance: Washington-McLaughlin Property and a New Contract for the City Attorney

Among the seven voting items on the agenda are:

– A “Resolution Approving the City of Takoma Park’s Purchase of 2.68 ± Acres of Land, Known as Parcel 3, of the Washington-McLaughlin School Property at the Internal Revenue Service Public Auction Sale on January 22, 2015.” The resolution approves and ratifies the city’s $253,000 winning bid for the January auction purchase of the property’s wooded lot.

The city will apply $53,000 in privately donated funds toward the purchase, reducing the city’s cash outlay to $200,000. The council will vote a resolution of thanks to the individuals who are contributing toward our purchase of the property.

– The city issued a request for proposals for legal services late last year. After interviewing responding firms, the council decided to extend the tenure of the Silber, Perlman, Sigman & Tilev law firm as city attorney.

We’ll formalize our decision with an ordinance authorizing signing of a new contract, although the voting item will be pulled from the consent (non-discussion) agenda in order to allow discussion of contract terms. There are no major issues; an authorizing ordinance will pass, granting SPST a five-year contract with five option years. We’ll simply be fine-tuning the wording.

Takoma Junction is on the council’s agenda once again, this time in the form of council-staff review of the testimony at recent listening session and then discussion of proposal evaluation criteria.

I disagree with staff’s statement, “Of primary importance is how the development team will work with the Council and the community, not the specific design elements included in the preliminary submissions.” Specific design elements are primary, in particular, whether housing should be the project’s centerpiece in a wide building that includes the current Takoma Auto Clinic (Johnny’s) lot; whether we are accepting of a three-story building with a smaller number of housing units; and whether we will accept construction of a pillar-supported parking deck extending well over the wooded hillside. I’m referring to the Keystar/EcoHousing, Community 3, and Ability Project proposals. The fourth is Neighborhood Development Corporation, whose propoal doesn’t include any design elements that are *significantly* at variance with the Takoma Junction Task Force recommendations in my view.

You’ll find a timeline in the backgrounder file. Three future items are listed:

The mayor controls the council’s agenda. I have asked Mayor Bruce Williams to explain why the February 17 session would be non-public. This isn’t a question of authority; state law allows closed “administrative function” sessions. I simply can’t think of any topic we would discuss that could not be discussed in open session.

As indicated, the direction we’re heading is choice of a developer with whom we would discuss project modifications, including cooperative work with the TPSS Co-op to meet co-op expansion and operational needs, with the presumption that if we make progress, we’ll advance toward a formal agreement. I support this next step in the process started when we issued a development RFP over a year ago, although I’d think about engaging in these focused discussions with two top-tier finalists rather than one.

Please communicate your thoughts and concerns to me at 301-873-8225 or sethg@takomaparkmd.gov, or send your comment to clerk@takomaparkmd.gov for distribution to the whole council. And if you’d like to meet in person: My next drop-in office time is Tuesday, February 10, 5-6 pm at my office, 7006 Carroll Avenue #202. No appointment is necessary: Just show up.