Monday evening, November 24 will be the last public council meeting of 2014. With the exception of a non-public administrative session on December 8 (which I cover in a separate update), the council will recess until January 5, 2015.

The November 24 council meeting will open with a visit from Carolyn Biggins, who is chief of the Montgomery County Division of Transit Services, which manages the county’s Ride On bus system.

We all benefit from Ride On, whether we use it personally or not. The system has, unfortunately, earned a deserved reputation for erratic schedule adherence. The buses don’t run on time. We’re not going to solve that problem at the council meeting, but I’m hoping we’ll hear about steps Ride On is taking to improve service. Councilmembers may bring up other topics, and I know that Councilmember Tim Male plans to ask about Takoma Junction stop locations.

Do you have topics for Ms Biggins? (The buses that serve Maple Avenue?) Please let me know. 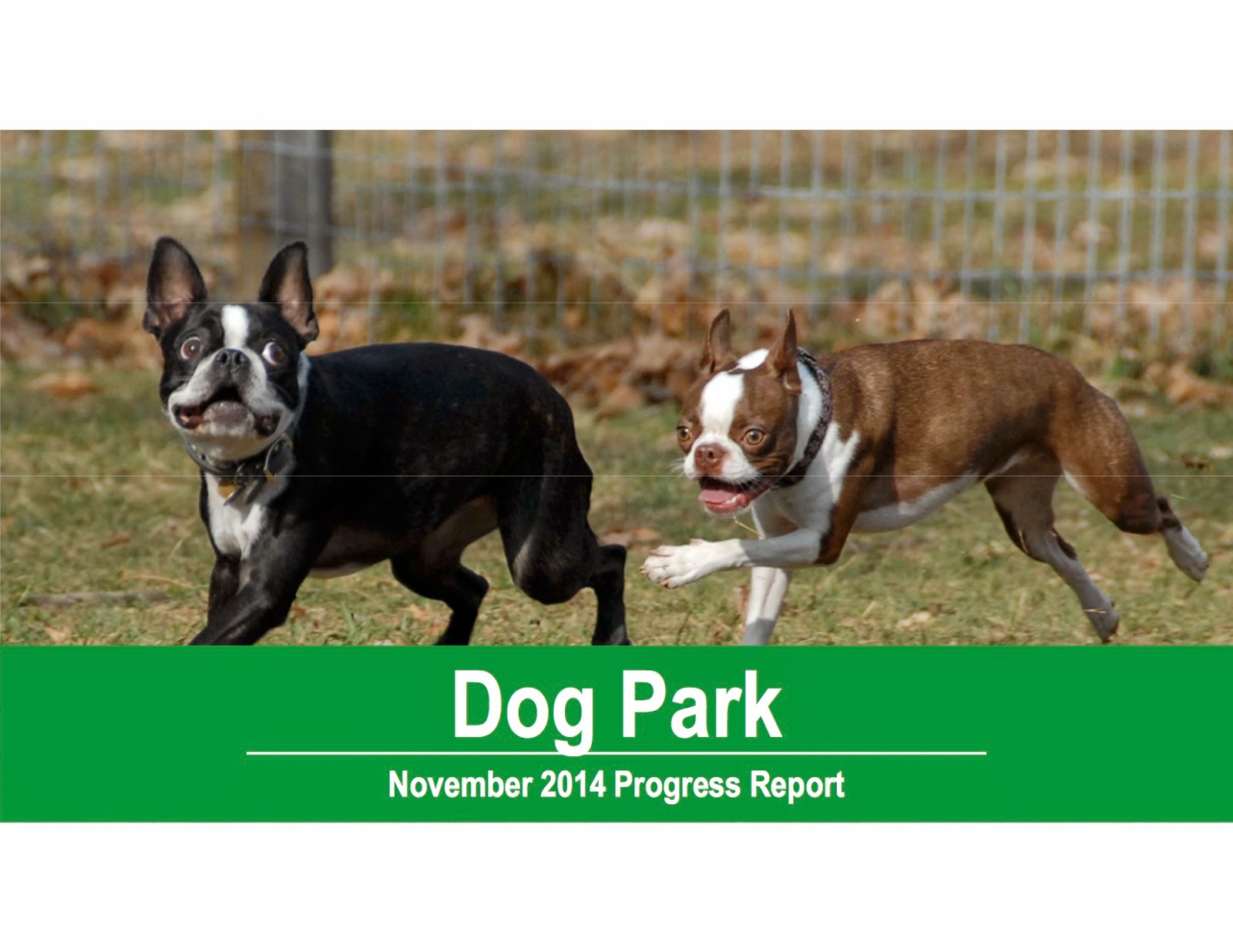 From the November 24 council backgrounder:

“Since June, City staff have arranged for a topographic survey of the site, soil borings and tree identification. In conjunction with the City, Takoma Dogs and a local architect, Eric Saul, have developed a concept plan for the site that includes a proposed lay-out of the site including one small dog/low activity area of roughly 4,700 sq ft and a large dog/high activity area of roughly 12,100 sq ft. A brief presentation has been prepared to update the Council on progress and next steps related to the dog park.”

A presentation is included in the backgrounder. It includes a working schedule and a proposed design. That proposed design does include a number of options that the council will discuss in light of cost and funding. Please let me know if you have comments or concerns.

I’m sure the presentation will be interesting, but I also suspect it will add little in the city’s determination of our path forward. Our direction will continue to be guided by the values and criteria discovered, via a community-consultative process, by the Takoma Junction Task Force (TJTF), and by the large amount of public comment we have heard this fall.

The city made a mistake in not providing detailed, clear guidance on community preferences to bidders via the request of proposals (RFP) we issued last January. We should have stressed the importance of the findings, recommendations, and options reported by the TJTF and of community consultation. I made a mistake in not pushing for inclusion of this guidance. Consequently —

None of the proposals the city received last spring sufficiently meet community or city needs in my opinion. Fortunately, as a small city, we have been able to provide, after the fact, guidance that was lacking in the RFP. The proposals — including the TPSS Co-op’s — have improved significantly.

Back to the Monday evening (November 24) discussion:

I’ll add that the estimates of certain financial considerations we’ll be discussing — the cost and income potential of parking, retail and office space, residential units, and community-amentity space that would be built by developers — is *of concern to developers but not to the city*. The point of an bidding process is to get bottom line financial figures from bidders. Our city will then weigh bottom-line cash return of proposed projects as a tertiary factor, behind community benefit and project feasibility, in our decision making.

Finally, I am hoping that my council colleagues and I can find a way to formally reinclude the TPSS Co-op as a bidder and not just as a developer add-on. The city did invite the co-op to participate in events such as last week’s open house. The co-op’s reworked design options and the inclusion of a professional development consultant on the project team address two of the three significant problems with the co-op’s spring 2014 proposal, and the third, lack of a builder partner, is addressable. The co-op’s proposal is now worth considering alongside the proposals of the four “finalists.” The city needs to obtain an up-to-date list of nuclear-weapons producers in order to enforce our Nuclear Free Zone ordinance. The city’s NFZ Committee evaluated options and identified and purchased a list from a supplier, at a $6,000 cost. In a consent-agenda item — no council discuss is scheduled, although you’re welcome to comment at the start of the meeting, around 7:30 pm — we expect to adopt a list prepared by MSCI ESG Research that the city purchased, with council approval, in July of 2014.

Why would you care? Some people think the city’s NFZ ordinance is out-dated and should be reformulated or even scrapped. Monday evening’s meeting is an opportunity to share your views.

As always, please let me know your thoughts on these or other city issues, by e-mail to sethg@takomaparkmd.gov or phone, 301-873-8225. Contact the whole council by writing to clerk@takomaparkmd.gov. Or pay me a visit. My next drop-in office time will be Wednesday, November 26, 8-9 am at 7006 Carroll Avenue, #202.