Takoma Metro site development is back on the public agenda in October… not that was ever off the community’s. I’ll explain what’s up, under the headings October and Community Action below, but first a couple of sections of background for those who need a refresher:

WMATA (Metro) and developer EYA propose a building with 200+ residential apartments, to be constructed primarily on the what is now paved surface parking at the Takoma Metro site. At its highest point — based on a “concept plan” released over the summer — the building would rise 5 stories above ground-level transit parking and amenity space. Given a grade that rises as you move from Eastern Avenue NW — where the building would have 4 levels total — toward the railroad tracks, the building would total 7 levels.

Much in the plan could change, and based on community reactions I’ve heard, most of us in the DC and Maryland Takoma community — those who know about the developer’s plan — hope that much will change. A mandated public process will afford us opportunity to be heard. We have to make the most of the process, and beyond the process, to motivate the changes we would like to see, more on which below.

WMATA staff and EYA presented their plans in July, 2013 meetings to the WMATA board’s real-estate committee, to a community meeting, and to the Takoma Park City Council. You can find their presentations online at dc-mdneighborsfortakomatransit.org, under the subheading Presentations from the July 16, 2013 community meeting. You can find conceptual design documents under the subheading Provided July 5, 2013 by Stan Wall, Director, Office of Real Estate and Station Planning, or refer to a blog item I posted on July 5. EYA Senior Vice President Jack Lester told me, in a September 24 conversation, that his company has not further developed plans. They are waiting for a WMATA board vote that would revive the now-expired Joint Development Agreement (JDA) that led to last decade’s failed development initiative, which would have placed townhouses at the Takoma Metro site.

What’s past is prologue. The next WMATA-EYA move is the JDA revival that Mr. Lester and his EYA colleagues are counting on. In October, look for:

On these topics, two notes:

A small group of community members and I started working in late winter to prepare for the revival of the Takoma Metro development project, which we saw as inevitable. Our timing was fortunate; we learned soon after about WMATA steps. We joined forces with ANC Commissioners Green and Wheeler, leading to the June 7 community notice the commissioners and I posted and to a June 19 letter to WMATA. After the July 16 community meeting, we expanded our organizing group. The discussion now extends to 20-some DC and Maryland community members, including representatives of Historic Takoma Inc. We hold a range of views and have worked to create consensus. We arrived at 3 key points, as follows. 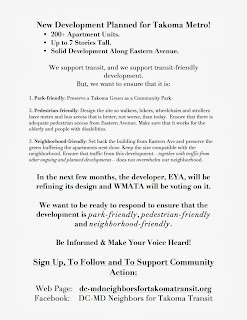 The group supports transit-friendly development, which in the Takoma Metro site context is development that:

The community group asks all Takoma stakeholders to endorse these principles. You can express your support by signing on electronically via the form at dc-mdneighborsfortakomatransit.org.

Regardless of your opinion, if you are a Takoma Park Ward 1 (Hodges Heights, North Takoma, Philadelphia-Eastern Neighborhood, Victory Tower) resident or business owner or employee, I would like to hear what you think, both your thoughts on the development proposal and what you think the City of Takoma Park should do.

October events will set the stage for further milestones:

I will do my best to keep community members informed of developments. For now, please sign on to join the community advocacy effort, if its principles reflect your view, and do share your thoughts with me.