I wanted to better understand the zoning so I started looking into it and taking notes. From there it was a small step to the the write-up below, although I wouldn’t call the write-up complete. One goal is to understand how significant a variance WMATA and/or EYA will be seeking, via Planned Unit Development (PUD), from what’s allowed by-right by the zoning. The greater the variance, the more room for push back, if we have something we want to push back on. Another goal is to understand the review steps and timing, information I haven’t compiled (yet). 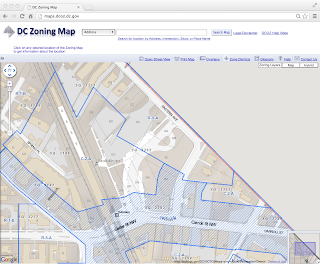 The Takoma Metro station is wholly in the District of Columbia. The location that would be developed is split between two different zoning designations, R-5-A and C-2-A. The R-5-A portion is adjacent to Eastern Ave NW. The C-2-A portion looks to be about 60% of the to-be-developed area, backing on the railroad tracks. I uploaded a map.

(Several years ago, Washington DC created a an TK/C-2-A Takoma Neighborhood Commercial Overlay District that includes the portions of the site directly on Cedar St, NW. Notably, “the Takoma Neighborhood Commercial Overlay District would… Reserve sufficient open space to provide adequate light and air to encourage retail and service uses, and pedestrian circulation in the vicinity of the Takoma Metro station”

The planned Takoma construction would not conform with these zoning limits. Here’s where the Planned Unit Development (PUD) comes into play.

A Planned Unit Development “allows a developer greater flexibility in site planning and building design. This flexibility permits the developer to incorporate amenities in the project that exceed those that could have been achieved under the general provisions of the Zoning Regulations. When a project is designated as a PUD, the ZC usually mandates the development of standards specifically tailored to the project.”

Further, the Takoma Metro site is in the (Washington DC) Takoma Park Historic District, which was listed as a local historic district subject to the D.C. Historic Landmark and Historic District Protection Act of 1978. The design would have to pass muster with the DC Historic Preservation Review Board. According to ANC Commissioner Sara Green, “The HPRB looks at a number of standards — primarily compatibility with the surrounding architecture. They do look at massing as well as the exterior design elements. The type of apartments and their size is not considered.”